Home Posts tagged "Saul Bellow"
By: Juan Pablo Torres Muñiz
Relating roads, destinations that are figurative at least, experiences, travel experiences – also through readings. In contrast to the images, these notes emerge:
Endings, and principles…
Thomas Wolfe’s greatest novel, Of Time and the River, concludes in a scene that matches in surprising measure with another, corresponding on the other hand to the beginning of the equally remarkable, immense, Call it Sleep, by Henry Roth. The return in one case, the first arrival, in the other. Firm land with the vastness of the ocean, a new opportunity, always. Suddenly (matters of light and rumors) we are also in a scene (or a shot, perhaps, by the grace of the periscope) of John Dos Passos…

With: Juan Pablo Torres Muñiz
Writing as a craft is something very different from habit, obsession or a simple exercise with a certain goal, e.g., catharsis (no matter the fact that nowadays everything can be published). It achieves the category of art in fulfilling a call for communication, distinguising itself from mere recording, information transfer or mnemonic tool in that it postulates a new, complete reality, reaffirming it in each new work. This reality faces other people’s one, their hints and sketches, their voids, questioning their motives and reasons. It implies taking sides. This happens frequently not so much in the assertions, but in the forms of expression adopted in the language, making clear the way of thinking, the mechanisms chosen by the intelect. It leads to T. S. Eliot dictum about everyone’s own syntax.
We’re talking about conscience and also of the result of a paradoxical stand, which implies more than a theory of structural arrengement. Every creator must surrender him/herself, with total attention, so that what finally distinguishes him/her would be the manifestation of his/her own elocuence, a revelation of the conscience, the subconscious and the unconscious, exposed as a remote, complex and changing prism.
To talk to Jorge Eduardo Benavides is an ideal occasion for glimpsing and learning more about all this, and specially as regards the novel. His cordial testimony goes beyond the field of literature. His manners reveal a wider mind. And a special charm. 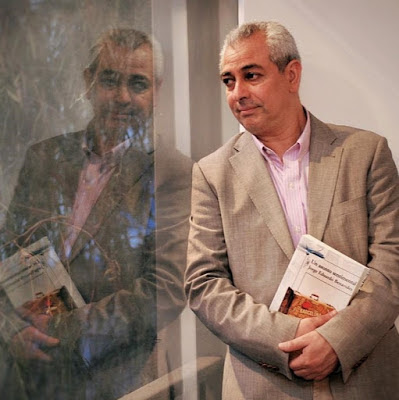