Home Sin categoría Dreams of city and reality: About the proposal of Jeremy Mann

Dreams of city and reality: About the proposal of Jeremy Mann

La Anábasis 10 January, 2018 10 January, 2018Sin categoría
By: Juan Pablo Torres Muñiz
Relating roads, destinations that are figurative at least, experiences, travel experiences – also through readings. In contrast to the images, these notes emerge:
Endings, and principles…
Thomas Wolfe’s greatest novel, Of Time and the River, concludes in a scene that matches in surprising measure with another, corresponding on the other hand to the beginning of the equally remarkable, immense, Call it Sleep, by Henry Roth. The return in one case, the first arrival, in the other. Firm land with the vastness of the ocean, a new opportunity, always. Suddenly (matters of light and rumors) we are also in a scene (or a shot, perhaps, by the grace of the periscope) of John Dos Passos…

It could be the same date, even at the same time. Moment of decisions.
Anyway, it‘s the Promised Land, which still knows nothing about us, and forgets rapidly. It seems easy to sow the way.
Given the sufficiency of the new horizon, in any case, it is difficult not to feel shaken by – the absences… – Nobody waits for us. And there was no one before us. 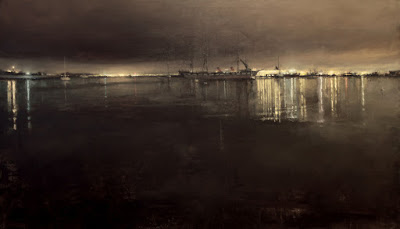 It is the case that the city, its voice, burns and illuminates the same apart from the time, opening up to an incalculable amount of situations. Always, – the same dominant flow. It drags.
Feet on the ground and then at each step, looking back makes a categorical denial. Ambition dictates better to enter and get lost there; maybe you even find yourself.
Of course, it’s an illusion. Like in the movies… 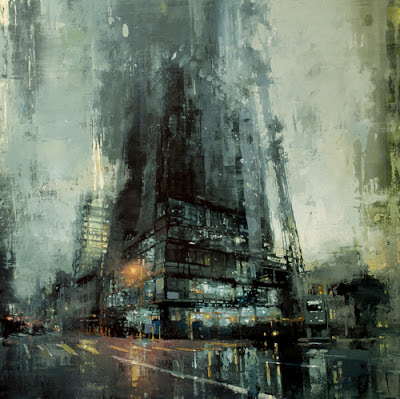 Already between these streets, let nobody expect the charm of The view of Delft. There is no humility in the struggle with glass and concrete; neither history. Nor romance.
Is this a landscape that paints as the end of a journey, the last destination? No, it’s just a path. The city is alive and it dreams. Ithaca is elsewhere. The city tells us maybe inside each one of us.
(New echoes of readings: Steps, by Jerzy Kozinski … We could follow him before Saul Bellow and even Don DeLillo, disposes well to tragedy, questions us about where we came from and where we are going or let ourselves go. He accompanies us in doubt. His author fell from another world and another reality – to live, though / however / and ended up killing himself. Maybe he soon found the void that, more recently, alludes Garth Risk Hallberg with his City on fire, by contrast, festively…) 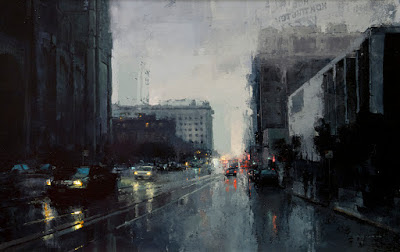 Jeremy Mann manages to concentrate and achieve the cinematic aura. ( – Effective him, – effective this.)
He seals with this illusion, with the tone of this dream, each painting.
His characters are rather mirages, perhaps to fight against the revelation of absences. After the tulle of smoke, fog, rain, they reveal themselves, without apparent rebellion, camouflaged in their environment. This does not stop the enormous range of possible stories, although it assigns them the same tone, and the wink: they have the city itself as its magical, tragic motivator. We have before us a new dream of superior will, now yes – some enthusiasts say –, incarnation of the true human desire. Of his good and his evil. Babel.
Moreover, if it is possible: Each apple – a fraction of a span of the new Adam; we believe that he dreams us, when in fact we dream of him, in film code. Son of delirium. 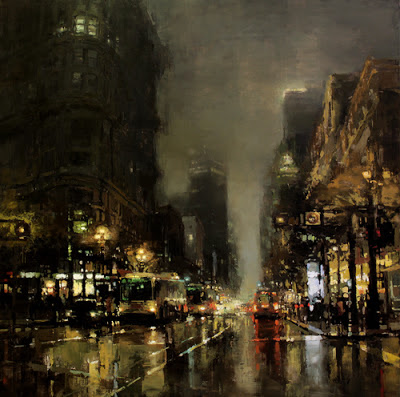 Myth. Another way to propose the American dream.
Is there a similar reference to Europe? The strength of these images correspond to a new body, although the aura shines at times – which crossed the Atlantic (in the organic character attributed to Petersburg by Biely, in the different but vulgar nature, a thousand times, of Joyce’s Dublin; in Doblin’s Berlin. Its people.). 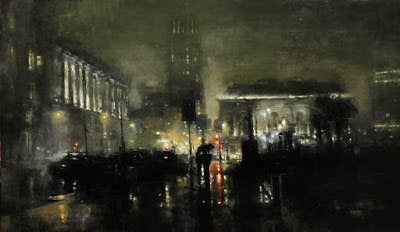 This mass is unstable because it lacks roots. It only plots horizontally, from delirium to delirium. It rises, and crushes.
It is natural that some of the most robust buildings are seen as fortresses of bastard causes.
Mann resolves once again through distance, mist, brightness, and the vibration of life itself in the city. Matter of technique: Monet versus the HD wave, and the vintage approach… 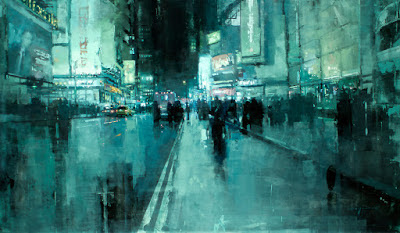 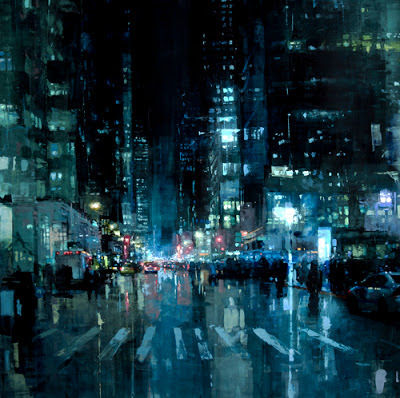 He eludes questions about the faces of people… Of what – behind the lights…
And the key is movement. In the stillness, perhaps, we would give without more with the fragile membrane of recent history, all dirty; with so much individual longing and so little to inherit in reality. Maybe we succumb.
But to what – 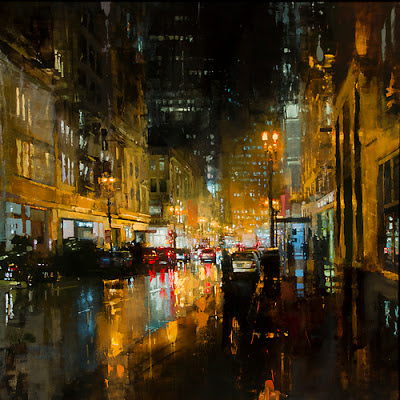 Jeremy Mann leaves the matter, to say, in ellipses. Run each person that wants to through the street, or get lost or fall. – Better.
The surprise goes somewhere else: It dares to a similar approach… with another scope (as if it were a zoom setting). 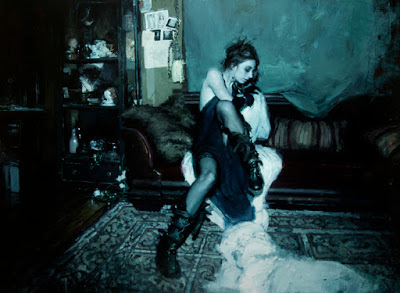 Again, the lure of a destination, this time in the field of – the particular.
To raise the Mann issue, we overlook the experience of the city, live in its nooks and crannies, as well as the homes in which families can be miserable in their own way. He prefers the workshop itself. The assumption of this as a “bet” is unthinkable.
Let’s see. 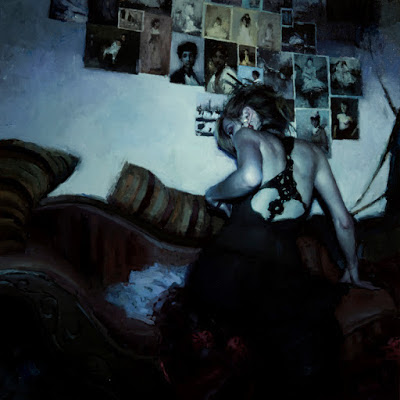 In the same way that he seeks to impress with the illusion of a general breath and ignite the anthill rumble, as well as it’s not that he lets the souls escape through the streets, but rather shuns making only one (with the consequent break and end of the vertigo), here, with his models, he pretends to enchant from the simple appearance, through technique. Impact.
There is no history behind. This, then, is about models that are only models. 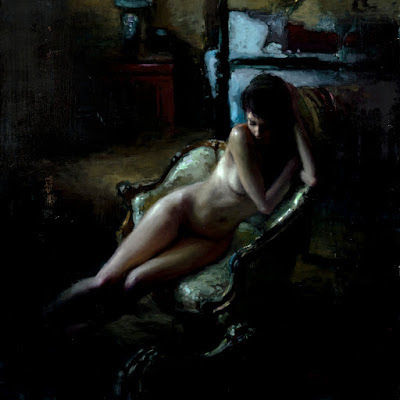 There are no questions. Nor astonishment beyond the pulse. Nothing emerges from the shadows: they are ready for contrast. The result is technically accomplished; other than that, pretty (!).
Here is a demonstration of the pursuit of beauty as a chimera. 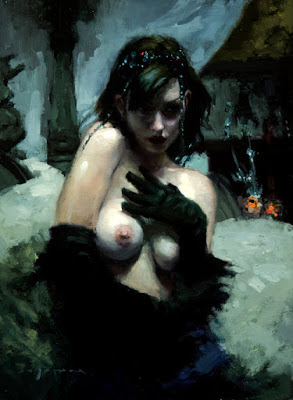 Outside the studio, it’s probably still raining. What’s the difference!: the rain from here does not evoke anything.
The insinuations in the closed space remain in the difficulty of the own stillness, that instant of the capture, according to the owner of the palette. 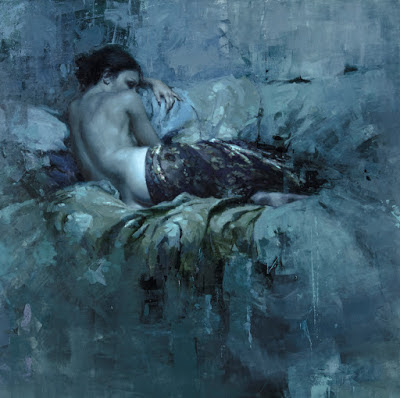 Their eyes are those of the deceived: who portrays them has promised them something. Or has paid them in advance something to push beyond the night itself. Nobody knows. The serious thing is that it does not cause to ask. Every assumption goes after justification.
With the day it will have to be reality, a reallity that is not insinuated in pictures, the one that simply lies outside. Actually alive. 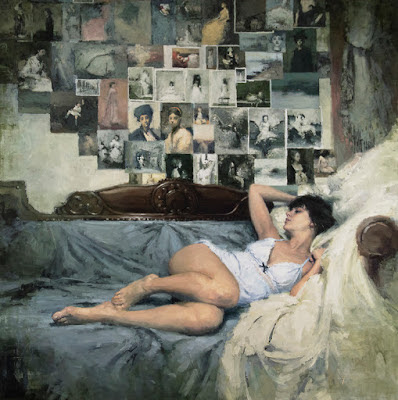 Here the reiteration is just that, repetition, not insistence.
The nobility of the classic models is evoked only in the handling of the brush and the palette, that is to say, again pure technique. And this, as resistance to other means that could well produce better results. It is an anachronistic gesture. To what, really, the desire for realism?
The latter is carried out, it is repeated in other elements. The attire, for example. It is that custom does not change tradition without meaning. This, which would determine the role, and consequently an interpretation of the models, is absent. The girls barely let the desire of the body surface; even remotely participate in a ceremony. This is procedure. The clothes, part in the list of production inputs.

Anyway.
At the end of the night, or back at the beginning of the night, far away again, it is worth remembering: the flashing lights sometimes spoil a view.
On the other hand, not always bringing the eye closer gives a clear vision of the object. Sometimes it is convenient, from where the imagination operates flexible, to rummage through the shadows, to intuit. 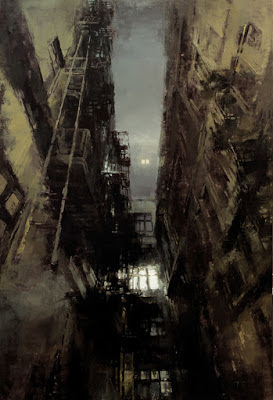 The vibration impresses. But, note that, it is a choice.
– It is convenient to distinguish between emotion and vertigo.
Thomas Wolfe, Henry Roth and John Dos Passos say their point. Of the voracity. Of lucidity. They cry, they denounce. They help in various ways to accept, also what is not known. 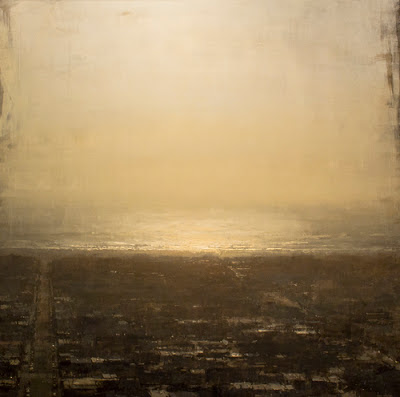